Great news. Within a day of launch the production costs of the first Daniel Morgan podcast has been funded. So expect our first full episode before Christmas

If you liked the true crime US podcast Serial, then you’ll find this even more eye opening.

The most investigated unsolved murder in British history, with Alastair Morgan and Peter Jukes

The funding costs of this podcast are being split equally three ways: to Alastair Morgan, Peter Jukes, and the producers Flameflower Studios

If you think the phone hacking scandal that closed News of the World was big, that was just the tip of the iceberg.

Once the project begins to get funded, around this Christmas, we aim to produce a half hour podcast every week or so, covering the six major phases of the story

Read more and do lend your support: The Daniel Morgan Murder: a 6 Part Podcast Serial Over the course of three decades, Daniel Morgan is the most investigated murder in British history. Now Byline can reveal how News of the World tried to derail the final fifth investigation, and how intimidation of the murder inquiry team continues to this day

13 Years of Harassment and Intimidation

Thanks to the exclusive revelations by former News of the World news editor, Greg Miskiw, we now know that the Sunday tabloid targeted the fourth murder inquiry into the Daniel Morgan murder inquiry on behalf of the murder suspects.

But now Byline can reveal those same former murder suspects have continued a campaign of planned revenge and intimidation right up to the present.

“Purely on the revenge side of things, I want to punish Haslam – Haslam and Cook and all those to do with the Morgan murder trial  ” Jonathan Rees in 2013

Back in 2002, Alex Marunchak commissioned a campaign against the lead officer in one of the sensitive murder inquiries in the country, involving hacking, surveillance and gathering illicit financial information

In  January 2003 the then News of the World editor Rebekah Brooks was warned that her senior executive Alex Marunchak had a 16 -year association with the suspects at the private detective agency, Southern Investigations.

She did nothing about it.

Instead, Marunchak was allowed to continue at his senior role at the Sunday tabloid.

Read More and Support my work on Byline: Getting Away with Murder: How the Fifth Morgan Murder Inquiry was Subverted and Ongoing Intimidation

One of the most shocking aspects of the phone hacking scandal was the way that News International, through its Management and Standards Committee, shopped over a hundred confidential sources and journalists to the Met Police in an attempt to avoid corporate charges in the US under the Foreign Corrupt Practices Act.

While very few journalists have been convicted under the Misconduct in Public Office law, at least 27 public officials have received sentences for receiving money for stories.

Much  more shocking even than this is the way News International used selective disclosure to pursue vendettas and silence possible witnesses. In the former category I would suggest the outing of Vicky Pryce’s allegations against her ex husband Chris Huhne would count as revenge for his position on phone hacking.

But most disturbing of all was their handing over of correspondence between former Detective Chief Superintendent Dave Cook and the Sun’s crime correspondent Mike Sullivan towards the end of 2011.

Finally, the lie has been exposed.

Back in June 2002, when the fourth investigation into the Daniel Morgan murder was announced, the News of the World began following, photographing, hacking, and obtaining personal information on the chief investigating officer, Detective Chief Superintendent Dave Cook, and his wife Jacqui Hames.

Not only was this a deadly serious attempt to subvert one of the most sensitive murder inquiries in the history of the Met, the surveillance placed on the couple and their young family at their private home was particularly traumatic for Hames. She had been a close friend and colleague of the BBC presenter Jill Dando, who was shot dead three years before on the doorstep of her London home.

The subversion of the Morgan murder inquiry began two days before Cook’s appearance on BBC’s Crimewatch when Sid Fillery, a former police officer and a suspect in the conspiracy, phoned Alex Marunchak, an executive editor of News of the World, with information about the new murder inquiry team.

Though he admits he took the call, Marunchak has always denied he was interfering with the murder investigation, and claimed he was only passing on a tip about the Hames having an ‘affair’ with a senior officer about to appear on the show – a line that Rebekah Brooks repeated before the Leveson Inquiry.

Now Greg Miskiw, a former colleague of Marunchak’s, and the news desk editor who tasked Mulcaire and the surveillance, explicitly contradicts their version of the events.

Read More and Support my work at Byline: Miskiw Confirms: News of the World subverted Murder Inquiry on behalf of Murder Suspects 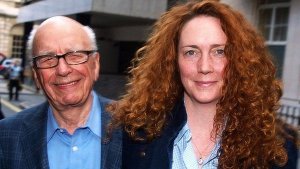 This is a version of the speech I’m giving this afternoon to an assembly of investigative journalists from Central Europe and Russia. My work looks paltry in comparison to the crusading work of most my fellow attendees. Among them is Andrey Lipsky, deputy Editor in Chief of Novaya Gazeta, one of the last publications in Russia still critical of Vladimir Putin, whose famous reporter Anna Politkovskaya was murdered in 2006. I’m also honoured to share a platform with Dmytro Gnap who covered the Maidan revolution in Kiev against all the odds – including baton charges and sniper bullets – for Slidtvo.info and Hromadske TV. Compared to either of these journalists I’m a celebrity hack

I come with some bad news. I come with some bad news about the state of the news in Britain today. It is now four years since Nick Davies broke the phone hacking scandal in the Guardian, and Rupert Murdoch closed one of the oldest newspapers in the world, the News of the World.From that came a political crisis: the resignations of the country’s most senior police officers, News Corp’s withdrawal of a billion dollar bid for BSkyB, a public inquiry – the Leveson Inquiry into the culture and ethics of the press –  and a dozen or so criminal trials. And what has been the result? I come mainly with bad news and a little ray of hope.Britain is supposedly the birthplace of the free press. From the coffee shops and bookshops around the legal centre of London – the Inns of Court – arose the newspaper industry of Fleet Street. For 150 years our national newspapers claimed to be at the forefront of our democracy.The fourth estate boldly declares its role is to expose corruption in politics and make power accountable. But the truth is – in the information age – media is a power in its own right. And rather than hold politicians to account, more often our newspapers held them hostage.

Read more and support my continued coverage at Byline: The Restoration of Rebekah: How Rupert Murdoch Hacked the UK