The  phone hacking scandal that closed News of the World was big, but that was just the tip of the iceberg.  At the bottom of that iceberg of ‘dark arts’ – hacking, burglary, bugging, and bribing bent cops – is the body of Daniel Morgan.

Over the three decades since Daniel was killed, five failed police investigations and an ongoing panel inquiry, his has become the most investigated murder in British history.

The story moves from back streets of London, through the highest echelons of Scotland Yard, to the offices of Rupert Murdoch’s best selling newspapers, to the doors of Number Ten Downing Street.

If you haven’t heard this story, ask yourself, why?

Great news. Within a day of launch the production costs of the first Daniel Morgan podcast has been funded. So expect our first full episode before Christmas

If you liked the true crime US podcast Serial, then you’ll find this even more eye opening.

The most investigated unsolved murder in British history, with Alastair Morgan and Peter Jukes

The funding costs of this podcast are being split equally three ways: to Alastair Morgan, Peter Jukes, and the producers Flameflower Studios

If you think the phone hacking scandal that closed News of the World was big, that was just the tip of the iceberg.

Once the project begins to get funded, around this Christmas, we aim to produce a half hour podcast every week or so, covering the six major phases of the story

Read more and do lend your support: The Daniel Morgan Murder: a 6 Part Podcast Serial

Daniel Morgan was a private investigator who was murdered in the car park of the Golden Lion pub in Sydenham in March 1987. He was said to have been close to exposing important police corruption. His death was the subject of several failed police inquiries and in 2011 was at the centre of allegations concerning the suspect conduct of News of the World journalists. Was he second alleged victim of the infamous gangster Kenneth Noye?  And what part did his former business partner Jonathan Rees and the last to speak to him have in his murder?  Sid Fillery, who led the initial murder investigation, retired from the Metropolitan Police on medical grounds and took over Daniel Morgan’s position as Jonathan Rees’s partner at Southern Investigations.

In 1998 Metropolitan Police Deputy Assistant Commissioner Roy Clark conducted a third, secret, inquiry into the murder during which Southern Investigations’s office was bugged.  In December 2000, Jonathan Rees was found guilty of conspiring to plant cocaine on an innocent woman in order to discredit her in a child custody battle and sentenced to seven years imprisonment for attempting to pervert the course of justice.Peter Jukes – writer and adviser to Byline – world’s most visited crowdfunded journalism siteJason McCrossan spoke to author and journalist Peter Jukes who outlined the history of the case and developments that he himself has discovered that shine a light on links between journalists and met police which strike at the heart of the British justice system.For more information visit Peter Jukes page:

Rebekah Brooks worked at News of the World for all but two years from 1989 to 2003. How much did she know know Southern Investigations and police inquiries into their role in the murder of Daniel Morgan?

We can all make mistakes.

In my last piece I erroneously said there was only one mention of the Daniel Morgan murder in the News of the World. In 1989, soon after the CPS dropped charges  against him in a second murder investigation, the Sunday tabloid published an interview with Jonathan Rees, Daniel’s former partner.

The interviewer, News of the World’s crime editor Alex Marunchak, failed  to mention that he had by then formed a successful business relationship with Rees and his private detective agency, Southern Investigations.

The 30 year cover-up of the Daniel Morgan murder is often portrayed as a murky morass. But revisiting the news coverage of the time, the outlines of the alleged conspiracy are clearer than you would imagine.

As the Daniel Morgan Independent Panel continues to sift through years of evidence on the most investigated  murder in British history,  four key characters emerge from the news coverage of the time.

What is startling about the Daniel Morgan murder is that the key allegation of police conspiracy was made within weeks of the 37-year-old’s murder on 10 March 1987. The Times reported Daniel was “due to be interviewed by West Yorkshire police about a fraud he had uncovered.” Meanwhile, in the Daily Express:.. (CONTD) END_OF_DOCUMENT_TOKEN_TO_BE_REPLACED 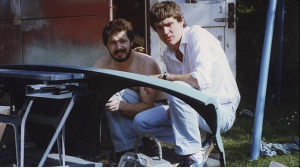 Sometimes the truth is hidden in plain sight.

Cited in Joe Public’s stunning collation of evidence of police collusion in News of the World’s various crimes published on Bellingcat is some detail from a Nick Davies article from July 2011.

At this point in 2002, Dave Cook was the public face of a covert fourth investigation into the prime suspects in the murder of private detective Daniel Morgan.  END_OF_DOCUMENT_TOKEN_TO_BE_REPLACED

END_OF_DOCUMENT_TOKEN_TO_BE_REPLACED

The Press Gang have another exclusive on the Mirror Group’s involvement in the dark arts, which has recently been exposed in ongoing civil cases into phone hacking.

But as I’ve discovered over the past few years, phone hacking is only the more benign tip of a much larger murkier iceberg of illegal story gathering, surveillance, burglary and police bribes, which ultimately leads back to the Murder of Daniel Morgan.

Not so long ago, at a press event with Alastair Morgan, a senior Mirror journalist said they could never cover Daniel’s murder and the police cover-up for “political reasons.”

Below is just a snippet from the full article. But read the rest of it here to understand why

END_OF_DOCUMENT_TOKEN_TO_BE_REPLACED 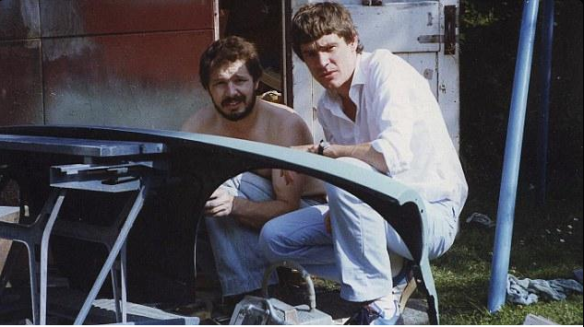 With considerable speed and grace, on Monday 16 March, Rupert Murdoch replied to Alastair’s letter, promising to co-operate with the Daniel Morgan Independent Panel inquiry, and explaining how News Corp’s Management and Standards Committee have already complied with requests from the police and the IPCC. 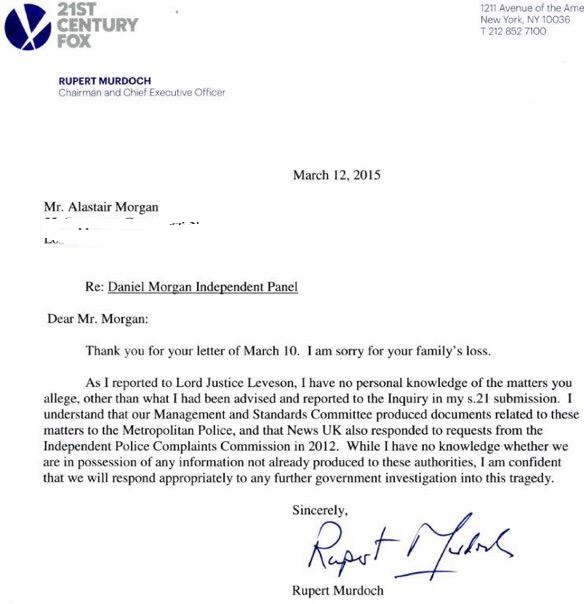 My original blog on the letter is below.

END_OF_DOCUMENT_TOKEN_TO_BE_REPLACED

Tomorrow marks the 28th Anniversary of the murder of private investigator Daniel Morgan, and his family’s amazing decades-long campaign for justice. The police corruption around the most investigated murder in British criminal history has been described by an assistant Metropolitan police commissioner as one the biggest stains on Scotland Yard’s history. But Daniel’s murder also leads straight back to the doors of the British press and its relationship with private investigators.  It is “the cradle where the dark arts were born” as a senior police officer once described it to me.