END_OF_DOCUMENT_TOKEN_TO_BE_REPLACED

The contents of some of the text messaging between Tony Blair and Rebekah Brooks from the period just before she was arrested in July 2011, have been shown to the jury at the Hacking Trial at London’s Old Bailey today. 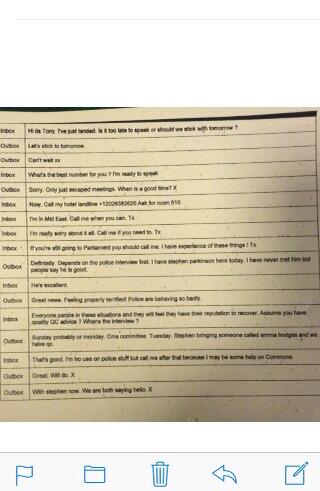 Thanks to Gaetan Portal from the BBC

END_OF_DOCUMENT_TOKEN_TO_BE_REPLACED

A clearer copy of email evidence submitted in the jury bundles on the last part of the prosecution case has been released by the CPS. The first email, from 11th of July 2011 shows an exchange between Rebekah Brooks and James Murdoch, which starts with a discussion of the sales for the last edition on the News of the World.

James Murdoch replies, querying why Brooks would put such things on email. The Daily Telegraph had reported that day on the ‘smoking emails’ which caused the closure of the News of the World. It was also the day that The Times led on reports that the police wanted to interview Brooks.  END_OF_DOCUMENT_TOKEN_TO_BE_REPLACED

So the air war continues. While the hacking trial has revealed how central the politics of personal destruction were to the now defunct News of the World, the Mail on Sunday has continued its campaign to yoke Tony Blair into Rupert Murdoch’s divorce from Wendi Deng.

Both front page splashes, from last Sunday and yesterday, seem to come from briefings from within News Corp, or sources close to the 82 year old media mogul, so should be taken with a boulder of salt. Though even the internal sources admit Deng’s friendship with Blair isn’t the cause of the divorce, they’re happy to keep the rumour mill rolling with a mixture of innuendo and guilt by association – a classic tabloid technique.

As George Monbiot suggested, that Deng and Blair had an affair is dubious and has been vigorously denied, but Blair and Murdoch did have a political liaison that lasted nearly 20 years. Indeed, in the famed public rapprochement at Hayman Island News Corporation summit in 1995, as the new Labour leader Blair flew half way around the world to court Britain’s most powerful press baron,  Murdoch compared their political dalliance to “two porcupines making love…. very carefully.”

This much is sure: that affair is now over, and Murdoch’s flirtation with New Labour seems to have ended in recrimination and vendetta. While tabloids blind us with the personalisation of politics, it’s worth looking at the politics of this personalisation.

END_OF_DOCUMENT_TOKEN_TO_BE_REPLACED

This is from the Mail Online and so should be taken with a boulder of salt. However, rumours of a Deng affair were circulating before the the hacking scandal in early 2011. They have been denied by her, and all those associated.  The one point that remains entirely credible is Michael Wolff‘s below: after all, he met most the player involved while writing his biography of Murdoch. Dan Sabbagh, formerly of the Times and now writing for the Guardian, has an interesting take on the Mail splash

Catching up with mail on sunday splash…mentions of murdoch v rare in associated titles even if Blair normally irresistible.

Given that…makes me think an angry murdoch wants it out there. #battleofthegodfathers

Claims of an affair between Mr Blair and Ms Deng swept the internet when Mr Murdoch filed for divorce in June. They were sparked by a tweet from BBC journalist Robert Peston who said: ‘Am told that undisclosed reasons for Murdoch divorcing Deng are jaw-dropping and hate myself for wanting to know what they are.’