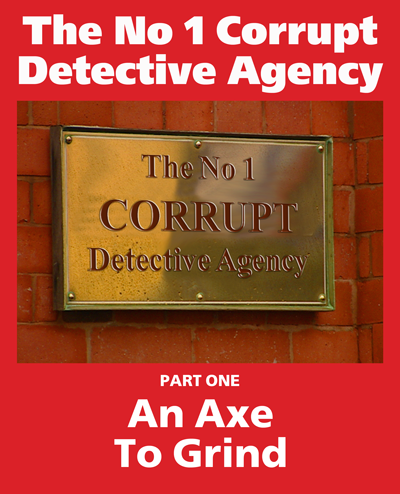 It’s not widely realised that the first big investigation into corrupt private investigators, police officers and the press, was Operation Nigeria (which morphed into Operation Two Bridges) in 1999, seven years before the first phone hacking inquiry. That investigation specifically looked at two senior named News of the World Journalists.

But as Paddy French, who has indefatigably stood up details from this era in his Press Gang site reports today, it  wasn’t just the News of the World which was compromised by the ‘No 1 Corrupt Detectives Agency’. The Mirror Group were involved as well. This partly explains why – as Alastair Morgan was told by a Mirror journalist very recently – the story of his brother’s murder is ‘too political’ for the Mirror Group to cover.

Below are three extracts from Paddy French’s important second chapter on the murder. Please visit his site and real the whole in in full at  ROGUE JOURNALISTS & BENT COPPERS | PRESS GANG.

They installed a bug in the offices of Southern Investigations in the south London suburb of Thornton Heath.

Documents written by anti-corruption detectives were later leaked to McLagan.

One of these stated:

“For a considerable period of time, there has been much spoken about DS Sid Fillery and his business partner … Rees being involved in corrupt activities involving serving police officers.”

” … the intelligence indicates that Fillery and Rees are corrupters of police officers and participants in organised crime.”

Rees and Fillery, the report went on:

“… are alert, cunning and devious individuals who have current knowledge of investigative methods and techniques which may be used against them.”

“They use some of the techniques in their own daily activities.”

Between June and September 1999, anti-corruption detectives monitored the day-to-day business of the detective agency.

Officers listened as Southern Investigations obtained information about the royal family from police officers to sell to newspapers.

Transcripts revealed that News of the World reporter Alex Marunchak was one of the agency’s major clients.

In one phone conversation, in July, Rees said the paper owed Southern Investigations £7,555.

In this period the agency sent 66 invoices to the News of the World — worth £13,000 — all but one of them addressed to Alex Marunchak.

The Involvement of the Mirror Group

In July 1999 Rees and Kingston were overheard discussing an officer in the diplomatic protection squad whose firearms certificate was withdrawn because he was taking steroids.

The information led to an article written by Gary Jones.

In March 2011 the BBC Panorama programme uncovered another extract from the transcripts generated in the bugging operation at Southern Investigations.

The programme revealed that, in July 1999, there was an angry exchange between Rees and Gary Jones of the Daily Mirror.

The reporter was under pressure from his accounts department to give more details about the payments he was authorising to Southern Investigations.

Rees insisted that he wasn’t going to provide any more details:

“You know I don’t want people coming in and nicking us for criminal offences.”

Backhanders and Bungs to Journalists

JONATHAN REES was given the codename “Avon” during the bugging operation of Southern Investigations.

The transcripts show the relationship between Alex Marunchak of the News of the World and the agency was deep but troubled.

On one occasion, in 1999, Marunchak demanded to know what information the agency were selling to his rival, Doug Kempster of the Sunday Mirror.

In a conversation with Sid Fillery, Rees said he told the News of the World reporter it was none of his business.

When Marunchak hinted that if Southern were engaged in illegal activity, the firm risked being raided by the police, Rees took this as a threat.

He told Fillery that, if Southern or any of its contacts were raided by the police, he would tell the News of the World the names of its reporters who were taking backhanders from Southern Investigations:

“I’ll say your fucking paper will get fucking tipped off about who gets backhanders.”